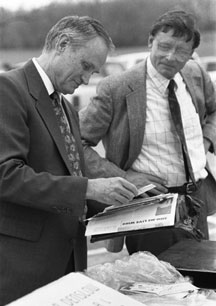 A parcel from the past was uncovered this spring at Shepard Hall, the administration building of the Missouri State Research Campus in Mountain Grove.  Construction crews discovered a time capsule behind the cornerstone of the building during the renovation of the facility.  The copper box was opened at a ceremony held at the Research Campus on May 2.  Dr. Jim Moore, director of the Research Campus, and Dr. Larry Banks, dean of the College of Natural and Applied Sciences, led the ceremony with department of fruit science staff and Mountain Grove community leaders in attendance.

According to Moore, the 1968 time capsule contained a reel-to-reel tape recording of the ceremony, a list of Mountain Grove citizens, news magazines and papers, business cards and a letter from the former director detailing the Fruit Experiment Station's commitment to the fruit industry in Missouri.

"It was clear, looking at the contents of the time capsule, that some things change," says Moore.  The enclosed U. S. News and World Report reported on the activities of the "Reds," while the Mountain Grove newspaper featured stories about the local young men in Vietnam.

The construction of the administration building in 1968 totaled $125,000, which, at the time, was thought by many to be rather steep.  After all, some older citizens reported that Faurot Hall, two homes and a shed constructed on the campus cost only $9,350 in 1900.

The Freemasons of Mountain Grove are credited with gathering the contents of the time capsule and laying the cornerstone in 1968, accompanied by Dr. Kenneth Hanson, former director of the Research Campus, area civic leaders and citizens.

According to Moore, it is not surprising the Masons organized the event.  The organization originally was adapted from the craft guild of the stone workers.  The cornerstone of Faurot Hall also was laid by the local Masons in 1900.

An interesting prediction by the former director was found in the time capsule.  He wrote: "One of the present objectives of the experiment station is to develop a wine industry that may eventually bring $5 million annually to Missouri."  Today, according to Dr. Murli Dharmadhikari, state enology advisor at the Research Campus, Missouri's wine industry has surpassed that prediction with over $9 million in annual wine production and another $9-10 million in wine-related business.